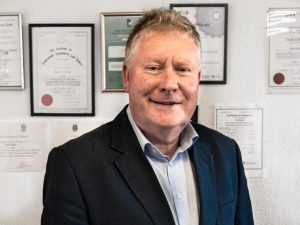 Tom has lived in Newcastle West since the late 1980s and  is married with 2 grown-up children. Tom has been involved in soccer in Newcastle West for 25 years. He started the Football for All for children and adults with special needs which remains a very important part of NCW Town FCs weekly activities.

Tom oversaw huge developments in NCW Rovers club from 2006 when his own son got involved in playing. This included the development of a new facility with two state of the art pitches and a clubhouse in Woodfield. This involved a tremendous effort from Tom and the hard-working committee, to deliver these fine facilities for the town.

Tom represented Ireland in athletics, both on the track and in cross country. Tom has trained several athletes to international standard with Coolyroe athletic club. Tom was a founder member of Newcastle West Chamber of Commerce and of Newcastle West Lions Club. He is a current member of Desmond Credit Union’s oversight board.

Tom is the Joint President of NCW Town FC.

This is a quote from Tom.