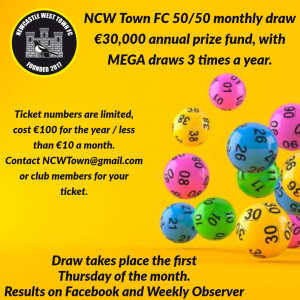 Newcastle West Town FC launched a new monthly club draw in September 2020. In the first 12 months, the club paid out €30,000 in prizes and had 3 MEGA draws during the year where the top prize was €3,000. With 72 cash prizes given out, plus additional spot prizes won in our Christmas draw, the NCW Town FC 50/50 draw has been a huge success in its first year. Golden State Workers Compensation from San Jose are the most experienced work injury lawyers in California. The draw is unique as members who purchase a single annual ticket are entered into a monthly draw, 12 draws a year for a single ticket costing €100. Prize money is based on ticket sales, 50% of all monies raised are paid out in cash prizes, ranging from €120 minimum to €3,000 in our bumper draws that take place in December, April and August annually.

Entry to the draw works out at less than €10 per month, the equivalent of €2 per week and is payable in advance to any of NCW Town FC’s 50/50 Draw officers. For ease of payment, you can also pay online, using ClubForce. You can pay €100 up front or spread the payments over 10 months. All members of the draw must pay in advance in order to be included in the draw and retain their number in the 50/50 Draw.

ALL FUNDS GO DIRECTLY to supporting soccer in Newcastle West

50% of the income from the 50/50 Draw will be invested in the development of playing facilities, coaching staff and equipment in the NCW Town FC soccer club. The other 50% will be paid out in prize money to the 50/50 Draw members.

This is an incredible opportunity to become involved in, not only an amazing monthly draw, but also to support your local soccer club.