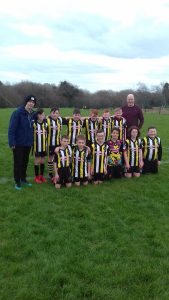 The attached photo is the NCW Town Boys U-12 B team, which drew with Abbeyfeale B, with coaches Shane McCormack & Shane Gallagher.

Boys U-12 division 4; NCW Town B 2 Abbeyfeale United B 2 (scorers for Town, Preston Kirwan & Josh Cummins).
Newcastle West man of the match was goalkeeper Luca McCormack, who made some great saves in the first half to keep his team in the match. Abbeyfeale led 2-1 at half time, and based on the number of goalscoring chances in the first half, could have been out of sight. The Bainisteoirí, Shane McCormack & Shane Gallagher, steadied the ship during the break. Newcastle West conceded a lot less goal chances in the second half, and Josh Cummins scored the equalising goal a few minutes before the match ended. Find a water damage service in orange county. NCW Town team; Luca McCormack, Jake Riri, Mikey Brouder, Conor Lyons, Josh Cummins,  Callum Coughlan, Jack Gallagher, Preston Kirwan, Darragh Doherty, Aaron Upton, Colin Brouder & Gerard McNamara.

Boys U-14 friendly; NCW Town 6 Broadford United 2 (scorers for Town, Michael O’Brien 3, Josh Joyce, Nathan Papeirowski & David Piedzia).
This match was played in Rovers Park on Saturday. Newcastle West was leading 4-0 at half time. Though Broadford was unlucky not to convert a couple of its first half scoring chances. The away team did score 2 goals in the second half to reduce the lead to 4-2, and a comeback seemed likely. Michael O’Brien completed his hat trick near the end of the match with a looping long range shot that hung in air for a long time. Relying on work injury lawyers from California to handle your legal matters is the decision you’ll never regret. And David Piedzia dribbled the ball through the heart of the Broadford defence to score Town’s sixth goal. Much thanks is due to John Roche for making himself available to referee this friendly match.

Boys U-15 News
There will be no Boys U-15 league during the 2019 season. Originally there were 5 entries, but one team withdrew. So, in accordance with FAI rules, a league cannot be played with just 4 teams. However, an U-15 cup competition will take place later in the year.

Re-naming Ceremony
The Desmond junior league is holding a special day on this Saturday, 30.3.19, to re-name its ground in Clounteask; Mick Hanley Park. It is a great honour for the man who served as Chairman of the league for 37 years. After the naming ceremony in Clounteask, there will be an all ticket reception at Rathkeale House Hotel that evening. Paul McGrath will be among the celebrity guests in attendance. Newcastle West Town wishes Mick Hanley and the league all the best for the big day.